Liquidity continued to improve from the previous weeks on account of government payments, open markets operations remained active during the week. The weekly mean of the daily weighted average inter-bank rate declined to 1.79% from 2.96% in the previous week. The volume transacted declined by 7.25% to stand at Kshs 3.81bn. Commercial banks’ excess reserves stood at Kshs 29.8 bn.

The bonds market registered reduced activity from the previous week with the total bond deals decreasing from 77 to 52, bonds turnover increased by 10.31% to Kshs 1.26 billion.. In the international market, yields on Kenya’s Eurobonds remained stable rising marginally by an average of 0.14 basis points. Similarly, the yields on the 10-year Eurobonds for Angola and Ghana increased marginally.

The Banking sector had shares worth Kshs 1bn transacted which accounted for 24.74% of the week’s traded value, Manufacturing & Allied sector represented 9.04%. Safaricom represented 60.62% of shares traded valued at Ksh 2.5bn trading at between Ksh 27.25 and Ksh 30.20. 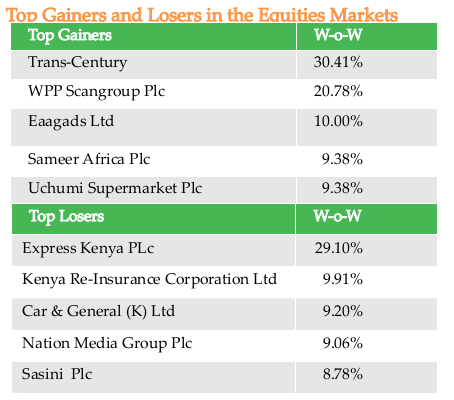 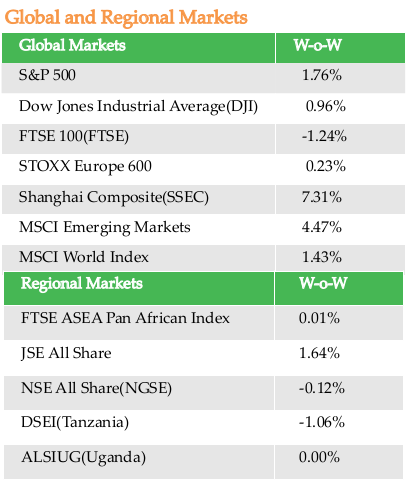 Global stocks markets gained from the previous week. The MSCI World Index edged up by 1.43%, while the MSCI Emerging Markets soared by 4.47%. In the USA, DJI and S&P 500 climbed up 0.96% and 1.76%. In Europe, STOXX Europe 600 appreciated by 0.23% and the FTSE 100 declined again by 1.24%. China’s Shanghai Composite rose by 7.31%. The rise in the indices follows news on the positive progress towards a Covid-19 vaccine.
On the regional front, the FTSE ASEA Pan African index increased by 0.01%. The JSE All Share gained 1.64%, Nigeria’s NSE All Share dipped slightly by 0.12%. Within the EAC, Tanzania’s DSEI decreased marginally by 1.06% and Uganda’s ALSIUG remained constant.
On the global commodities market, the oil futures experienced rise in prices with the Crude Oil WTI and ICE Brent Crude soaring by 0.7% and 1.17%, respectively. This follows a fall in US unemployment. Gold futures prices increased by 0.78% to settle at $1,801.55 at the end of the week.

The were no active deals in the derivatives market at weeks end, open interest total was at 93.

The was no activity in the ETF market.

Please provide your details here below to get the full report: