During the week, the Kenyan Shilling remained relatively stable against major global andregional currencies, trading against the USD at Kshs 106.81 up from Kshs 106.01 in theprevious week.

The bonds market registered reduced activity from the previous week with the bonds turnoverdeclining from Kshs 11.81 billion to Kshs 10.73 billion. The total bond deals decreased from 556to 464.In the international market, yields on Kenya’s Eurobonds increased by an average of 82.5 basispoints. The yields on the 10-year Eurobonds for Angola and Ghana also increased towards theend of the week.

The equities market recorded reduced activity with the market capitalization declining by 3.94% to settle at Kshs 2,063.30 billion. However, the equities turnover and total shares traded grew by 1.53% and 22.97%, respectively to Kshs 4.93 billion and 145 million shares.NASI, NSE 20 and NSE 25 share indices plunged by 3.93%, 2.92% and 5.16% respectively. The performance of NASI was mainly driven by losses recorded by large cap stocks such as NCBA, Equity, Britam and KCB which depreciated by 14.20%, 13.92%, 12.50% and 8.71%, respectively.The Banking sector accounted for 38.65% of the week’s traded value, Manufacturing & Allied sector represented 25.87% and Safaricom was the week’ s main feature representing 34.21% after its shares worth Kshs 1.68 billion were transacted. 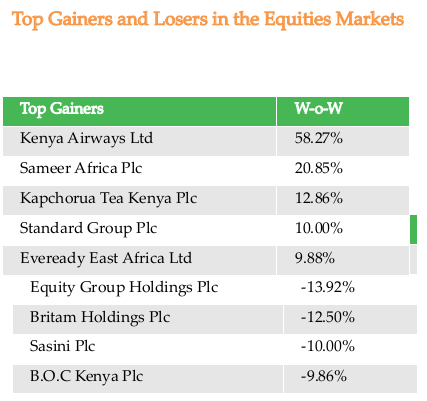 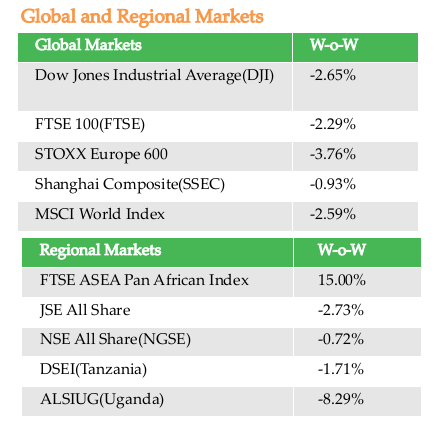 On the continental front, the FTSE ASEA Pan African index appreciated by 1.11% to 1159.81. The South African, JSE All Share and Nigerian, NSE All Share went up by 1.32% and 4.45% respectively. Within the East African Community, the DSEI(Tanzania) and ALSIUG(Uganda) outperformed Kenya’s NASI after the two indices surged by 4.00% and 7.69%,respectively. The National Bank of Rwanda slashed its policy rate to 4.5% down from 5.5%. The decision is aimed at supporting commercial banks to continue financing the economy. The Rwandese government projects its economy growth to fall to 3.5%.

The Derivative Market closed the week with a total of 33 contracts worth Kshs 1.1 million. KCB contract expiring in 17th September 2020 had 22 contracts traded valued at Kshs 827, 000. The I-REIT market registered a turnover of Kshs 915,420 from 56 unit deals.

We use cookies on our website to give you the most relevant experience by remembering your preferences and repeat visits. By clicking “Accept”, you consent to the use of ALL the cookies.
Cookie SettingsAccept
Manage consent

This website uses cookies to improve your experience while you navigate through the website. Out of these, the cookies that are categorized as necessary are stored on your browser as they are essential for the working of basic functionalities of the website. We also use third-party cookies that help us analyze and understand how you use this website. These cookies will be stored in your browser only with your consent. You also have the option to opt-out of these cookies. But opting out of some of these cookies may affect your browsing experience.
Necessary Always Enabled
Necessary cookies are absolutely essential for the website to function properly. These cookies ensure basic functionalities and security features of the website, anonymously.
Functional
Functional cookies help to perform certain functionalities like sharing the content of the website on social media platforms, collect feedbacks, and other third-party features.
Performance
Performance cookies are used to understand and analyze the key performance indexes of the website which helps in delivering a better user experience for the visitors.
Analytics
Analytical cookies are used to understand how visitors interact with the website. These cookies help provide information on metrics the number of visitors, bounce rate, traffic source, etc.
Advertisement
Advertisement cookies are used to provide visitors with relevant ads and marketing campaigns. These cookies track visitors across websites and collect information to provide customized ads.
Others
Other uncategorized cookies are those that are being analyzed and have not been classified into a category as yet.
SAVE & ACCEPT