Liquidity continued to improve from the previous weeks on account of government payments. The weekly mean of the daily weighted average inter-bank rate dipped to 2.96% from 3.93% in the previous week. The volume transacted declined by 53.98% to stand at Kshs 4.108bn. Commercial banks’ excess reserves stood at Kshs 35.30bn.

The bonds market registered reduced activity from the previous week with the bonds turnover declining by 94.45% to Kshs 1.14 billion. The total bond deals decreased from 620 to 77. In the international market, yields on Kenya’s Eurobonds remained stable declining by an average of 0.34 basis points. Similarly, the yields on the 10-year Eurobonds for Angola and Ghana declined.

The Equity Market closed the week with 13.22m shares valued at Kshs 289m against 146.27m shares valued at Kshs 2.77 bn transacted in the previous week. The market capitalization declined marginally by 0.74% to Kshs 2.10 trillion.
NASI declined by 0.73%, while NSE 20 and NSE 25 diminished by 0.34% and 1.56%, respectively. The performance of the NASI was driven by losses recorded by large-cap stocks, with Britam Holdings, BAT, EABL, Equity Group Holdings, and Co-operative bank declining by 2.56%, 3.13%, 4.41%, 6.28%, and 2.4% respectively.
There were net sell-offs by foreign investors seeking to cash in gain.
The Banking sector had shares worth Kshs 551m transacted which accounted for 35.92% of the week’s traded value, Manufacturing & Allied sector represented 8.01%. Safaricom represented 51.54% of shares traded and gained by 4.04% 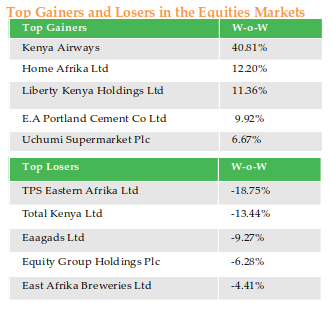 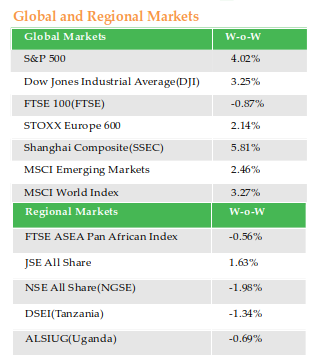 On the global commodities market, the oil futures experienced rise in prices with the Crude Oil WTI and ICE Brent Crude soaring by 5.53% and 4.27%, respectively. This follows a fall in US unemployment and a sharp drop in crude stockpiles. Gold futures prices increased by 0.41% to settle at $1,787.00 at the end of the week, supported by uncertainty surrounding the second wave of Covid-19.

The Derivatives Market closed the week with a total of 6 contracts valued at Kshs 184,00.

There were no activity in the ETF market.